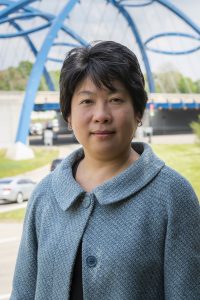 Yung holds a Bachelor of Science in civil engineering from the Ohio State University and a Master of Engineering in transportation from the University of California at Berkeley. She is a licensed professional engineer in the state of Michigan.
Yung has worked for MDOT since 2001 and brings various experience to the position in a variety of roles:

Served for the past nine years as the Taylor TSC manager.

Previously appointed as the project and contract engineer, as well as Taylor TSC development engineer.

Among Yung’s track record of success:

Working closely with the communities she serves, their residents, businesses, and local elected officials to identify and address their specific needs.

Delivering complex projects on I-275, I-94 and I-96, in addition to maintenance operations on freeways in Wayne County.

Yung replaces Kim Webb, who will retire by end of December after 33 years of services with MDOT.

As Administrative Coordinator, Lindsay is responsible for meeting the needs of MITA members in many areas of the association. Her primary function is to help expand efficiencies in the MITA office by providing support services to staff and members. Lindsay helps MITA’s Director of Safety and Compliance to process MIOSHA Appeals, CPR & First Aid cards as well as processing requests for other jobsite needs. She also assists the Events Coordinator with the MITA website, events and related databases, in addition to answering the phones.